It was the decade of big hair, tiny clothes and impressive technology of all things groovy.  It was a time when modern technology was advancing at lightning speed, paving the way for the future and changed the world of work in measurable ways.

At HGS, the 1970s was also the decade that ushered in an employee that could make sense of it all.  Jeff Ebener, Senior Application Developer, has seen it all, having worked at HGS for 45 years.  After more than four decades helping HGS navigate the world of computer programming, he is hanging up his mainframes and retiring effective June 5, 2020. 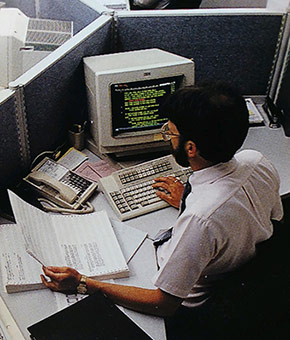 When Jeff began his career at HGS on July 7, 1975 as a computer operator using mega IBM mainframes, the organization developed programs internally, forfeiting the need to purchase any software.  In that role, he managed a team of programmers, some of whom were charged with performing long-term development for the organization.

At 45 years strong, Ebener acknowledged HGS “has been my longest relationship.”  During that time, he has witnessed massive changes in the world of enterprise technology.

Based in the Peoria, IL office, he admitted that “It was crazy back then. Employees were still using keypunch cards and no one understood the concept of a help desk.”

He added, “The first 25 years of my career, we were writing everything and training everyone on the programs.  I was the first person to write a program in CICS COBOL for Ruppman.”

During his tenure, Ebener has been at the helm of many major technology developments at HGS.  One of the more memorable initiatives involved getting the phone system to communicate with the switches.  “HGS was one of the first companies to do that,” he explained. “That’s something you didn’t see competitors doing.”

According to Michelle Chaney, HGS Fulfillment Administrator, Ebener is the right person to lead such initiatives.  “He is pretty much everyone’s go-to guy from questions related to programming to call centers and to everything in between.  He has brought so much expertise and knowledge to the table,” she said.

Chaney, who worked with Ebener for 33 years added, “I learned firsthand the depth of his knowledge.  No matter what it was, he knew how it worked and he has been willing to explain it to us in simple, easy terms.  You always knew that if Jeff was on the team, the right questions were going to be asked and he would prepare for and anticipate any challenges.”

A major lesson learned from having worked with and for Ebener, according to Chaney, was the importance of quality control.  “He is a big tester,” she said.  “He always drilled that into our heads.  And it made a big difference in making sure all conversions happened smoothly.”

However, Ebener’s value to the organization goes well beyond his technical expertise.  Chaney , who reported to him for a few years, noted that one of his biggest assets is the way in which he works with colleagues across the organization.  “He mentors everyone and is so patient and helpful as he works to resolve issues or explain complex topics,” she said.

Chaney shared a story that illustrates Ebener’s valuable approach in working with team member and colleagues.  “I remember when I first started working with Jeff.  I came from the call center and was new at my position in data center controls.  One day, he asked me for the ‘035’ reports and I had no clue what he was talking about.  He explained what they were and I realized I had what he needed right on my desk.  I felt like an idiot but learned quickly that Jeff just isn’t that type of person.  He’s never bothered by having to explain something to someone and never made you feel like you were stupid for asking a question.”

As an effective mentor and manager, Ebener also sought to recognize and elevate his team.  One example is when he sent Chaney and another colleague to attend UniKix training.  After the successful completion of the HGS conversion during a large group meeting, Ebener presented them with an award for their work.

Chaney added, “I cannot think of anyone who has been more of an asset to HGS than Jeff.  The roles he has played, the knowledge he has gained and shared, the friendship he has shown and his patience have all made him an invaluable asset to the organization.  He is a role model and someone I have looked up to for more than three decades.  He is going to be missed more than one can imagine.”

As for Ebener, his long run at HGS has been a great ride.  “Throughout the 45 years I’ve been here, the organization has never given me a reason to leave,” he said. “I was never micromanaged and was allowed to do my job well.  I’ve always tried to manage in the same way.”

How do you follow up a successful and 45-year career at HGS? For Ebener, retirement will include spending more time with family including his two daughters and four grandkids, traveling, volunteering and attacking a growing list of “do-it-yourself” projects.

Jeff Ebener will leave large shoes to fill as he begins the next chapter of his live and leaves behind a stellar career at HGS.  The HGS organization extends Jeff heartfelt thanks for his many invaluable contributions and best wishes for a happy and healthy retirement.

How can retailers improve CX

Are you looking for a Work@Home solution?

Looking for an innovative partner for Healthcare Payer Operations?

Update Required To play the media you will need to either update your browser to a recent version or update your Flash plugin.